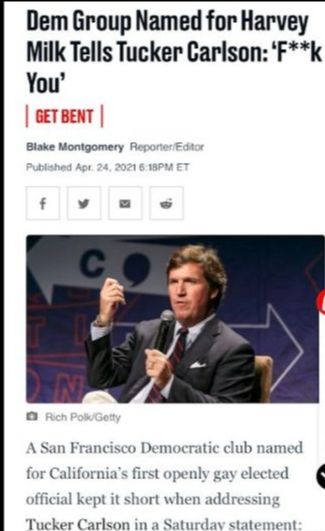 A recent snippet from The Daily Beast.

Amid everything else that happened last week, we learned that right-wing propagandist Tucker Swanson McNear Carlson listed himself as a member of The Dan White Society in his college yearbook. This blatant endorsement of the man who murdered Mayor George Moscone and Supervisor Harvey Milk in cold blood is especially heinous, yet perfectly consistent with Carlson’s brand of hateful rhetoric.

As the volunteer leaders of the organization originally founded by Harvey Milk, we are obligated to condemn Carlson and highlight the role he plays in upholding white supremacy, homophobia, and transphobia. The son of a Republican bureaucrat who served under Reagan and Bush Sr., Carlson spews a dangerously effective brand of faux populist white nationalism that belies his six-figure, East Coast education.

Along with his recent endorsement of the explicitly white nationalist “replacement theory,” which frames immigration as an existential threat to the future of our nation and the individual success of white people, in just the past few weeks Carlson has described Black Lives Matter protests as “an attack on civilization” and questioned whether Derek Chauvin received “a fair punishment” — when he has yet to be sentenced.

Carlson’s defense of Chauvin and exaltation of White, two police officers who committed murder, demonstrate a callous disregard for human life. His clear agitation at Chauvin’s conviction reveals his belief that straight white men, particularly cops, should be allowed to kill with impunity, as Dan White did.

Carlson has a documented history of making racist, misogynistic, and homophobic comments, instigating targeted attacks on female journalists, and stoking hysterical transphobia. It’s no surprise he identifies with White, who harnessed the same hatred and fear of change to propel himself into a brief political career, culminating in a horrific act of violence not unlike those carried out by some of Carlson’s viewers.

A chilling video by The Daily Show demonstrates how Carlson echoes the same talking points used in the manifestos of several mass shooters - revealing the unforgiving reality that this rhetoric inevitably results in violence and death.

Targeting Tucker’s advertisers with a public pressure campaign and demanding that Fox News take him off the air is a worthy cause. At the same time, we must remember that just as removing Trump from office did not end hate in this country, neither will removing Carlson. He is one of many figureheads for systemic white supremacy, and the fight to eradicate hate must continue no matter who peddles it, and no matter how they repackage it.

Read more about this story in The Daily Beast, HuffPost, Business Insider, The San Francisco Chronicle, The Advocate and The Guardian.

And check out our letter below: 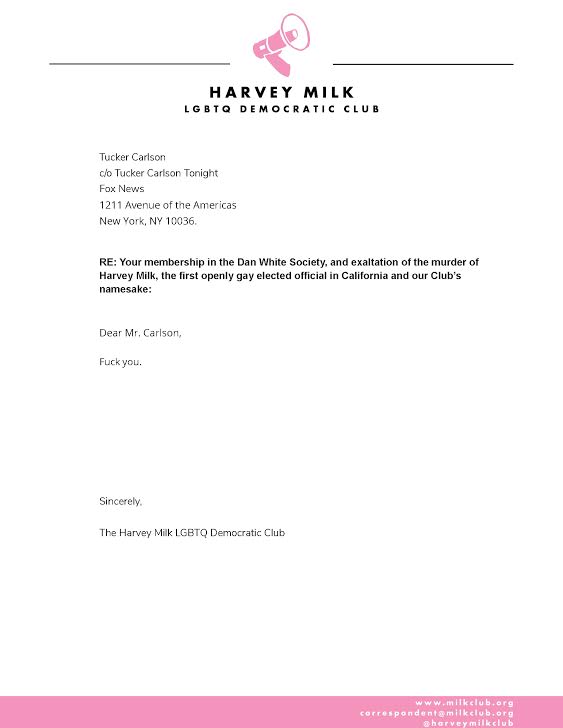 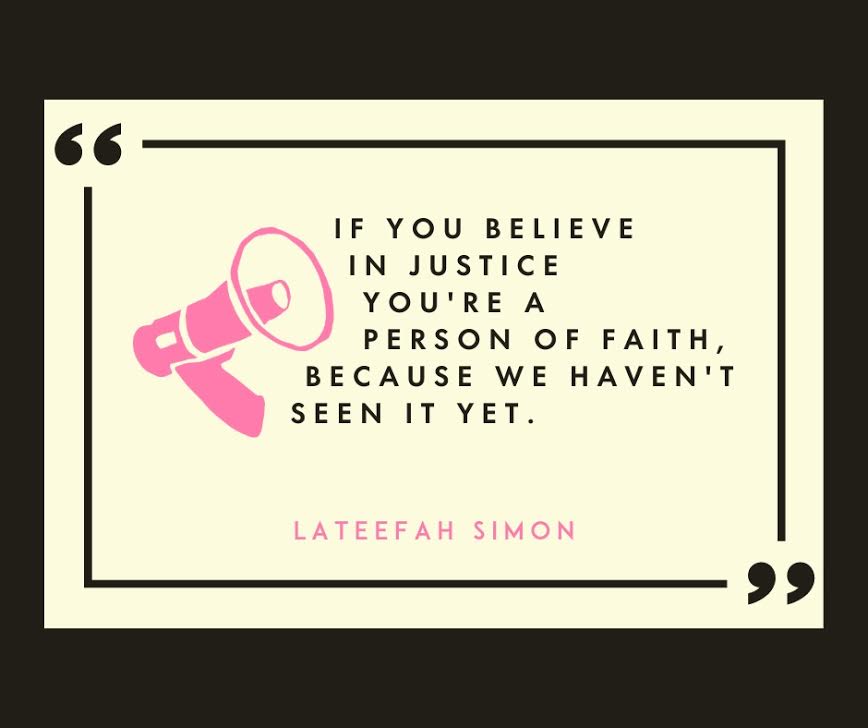 Thank you to everyone who attended our April General Membership Meeting. We heard from newly-appointed City Controller Carmen Chu and held a lively panel discussion on cross-racial solidarity with Chinese Progressive Alliance Director Lai Wa Wu and BART Board Member and activist Lateefah Simon.

If you missed it, you can watch it here.

At the meeting, our Membership voted on the following motions:

1) Authorize the creation of an Asian Pacific Islander Caucus.

2) Condemn the layoffs and cuts at CCSF.

3) Hold an official endorsement vote for Nina Turner for US Congress (OH-11) at our May General Membership Meeting. (Our recent fundraiser for her was a huge success, and we surpassed the fundraising goal!)

5) Reaffirm our support #30 Right Now Campaign to ensure that some of San Francisco’s most low-income tenants do not pay more than 30% of their income towards rent.

6) Oppose any signature gathering effort aimed at recalling any member of the SF Board of Education and instead build cross-racial solidarity with and for Asian and Black communities in the spirit of transformative justice. 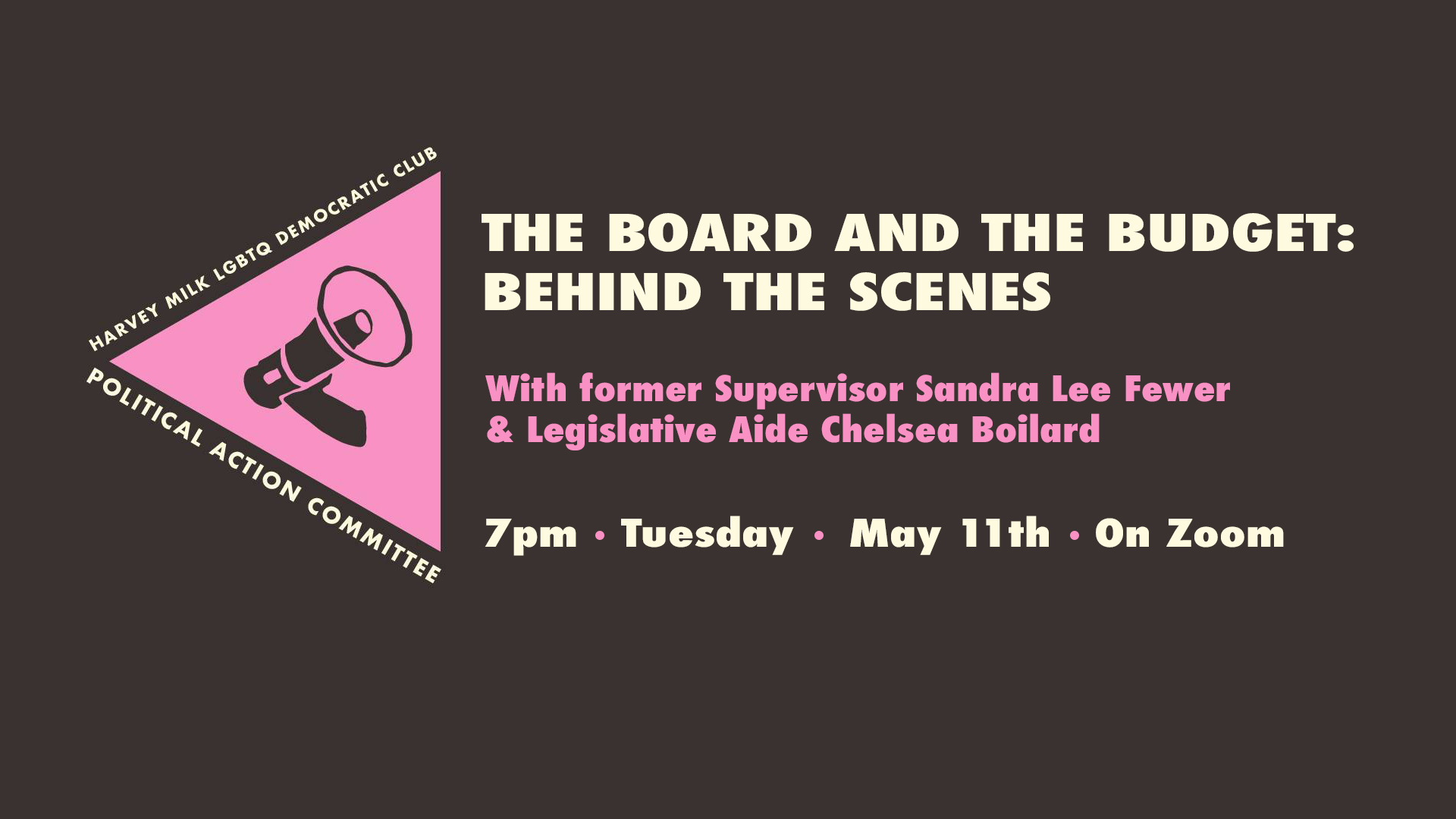 Join the Political Action Committee of the Harvey Milk LGBTQ Democratic Club on Tuesday, May 11th at 7pm.

For our fifth meeting of 2021, the PAC will host a behind the scenes look at the City's annual budget process with former Supervisor and Budget Chair Sandra Lee Fewer, and her former Legislative Aide Chelsea Boilard. This is a great opportunity to learn how San Francisco allocates billions of dollars and how you can make your voice heard!

Join the meeting on Zoom here. 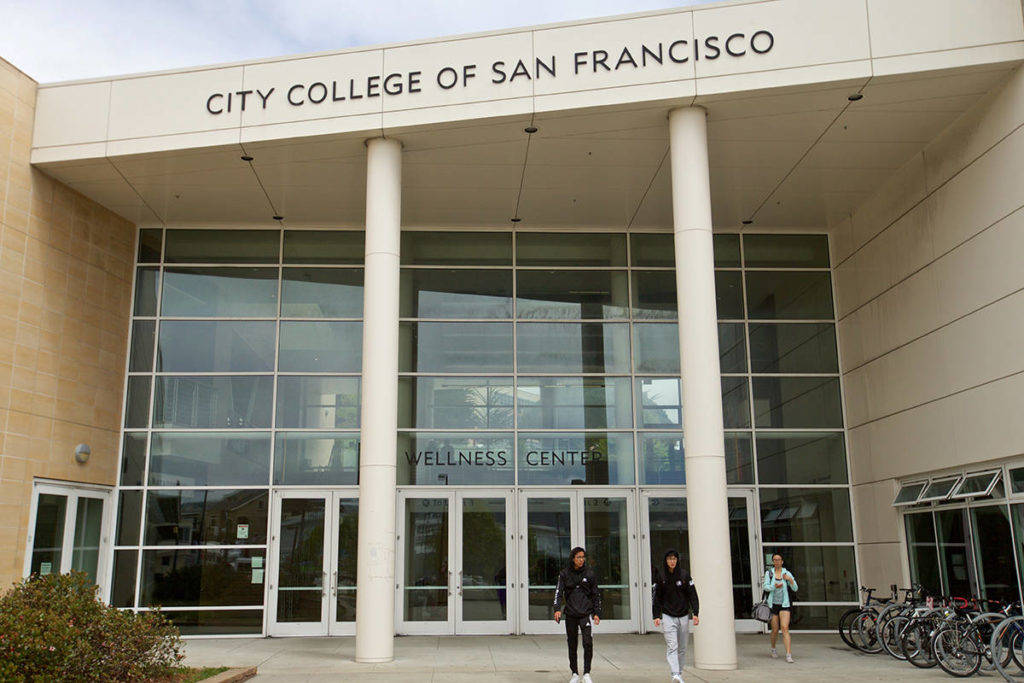 As previously noted, a motion was passed at our April General Membership meeting to condemn the vast layoffs and cuts that are being considered at City College.

Currently, the CCSF administration is seeking to terminate over 600 full and part-time staff, including 163 full time faculty and eliminating 50% of all classes, including major cuts to ethnic studies, Art and Nursing.

A full list of the potential cuts can be found here. Downsizing city college will only worsen the problem. Decreased enrollment means decreased state funding.

We urge the board of trustees and other CCSF administrators to take the following steps to save CCSF and avert the mass layoffs by:

1) Utilizing HEERF funding provided by the federal governments covid-relief package as well other public funding from the city.

2) Encourage access to enrollment by sending the full class schedule and enrollment information to every San Francisco home via mail or email.

5) Provide the development and contraction Diego Rivera Theatre that will allow for many job and educational opportunities including bringing in revenue through ticket sales, leasing merchandising etc.

6) Writing a letter to your supervisor to encourage them to support supervisor Hillary Ronen and Gordon Mars' efforts to expand Workforce Education Recovery fund (WERF) to address the years $30 million budget shortfall and next years projected $40 million shortfall. More info on WERF can be found here.

The deadline for finalizing the pink slip layoffs is May 15th! 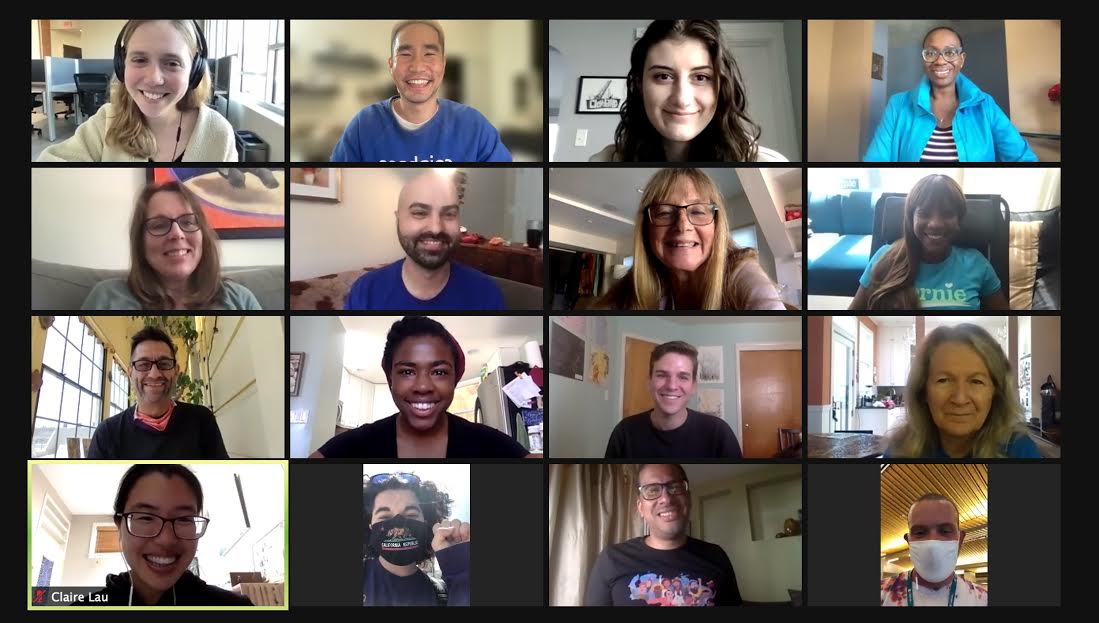 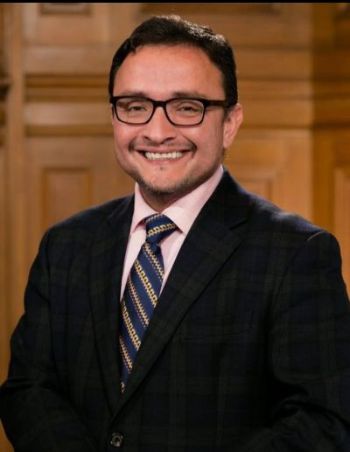 Congratulations to David Campos for being elected Second Vice Chair of the California Democratic Party! 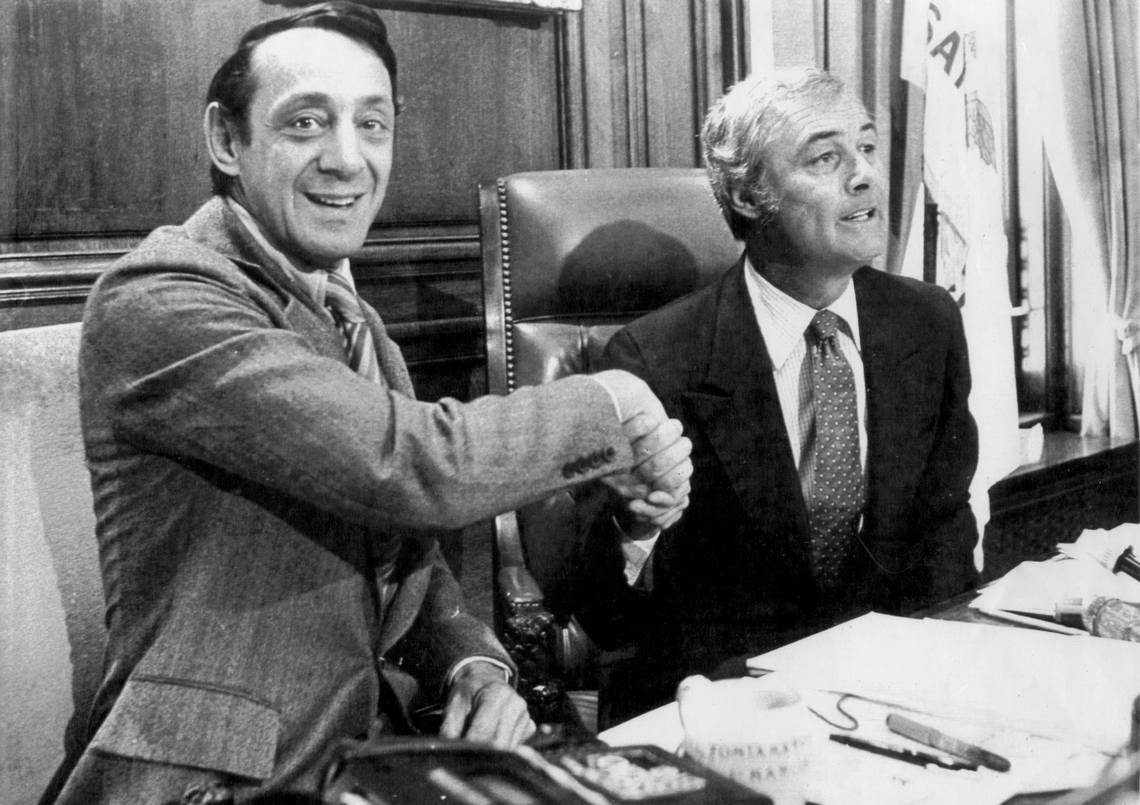 A photo of Dan White's victims.

The Milk Club is unapologetically progressive and proudly queer. Since 1976, we have built power with and for all of the Us’s — San Francisco’s most vulnerable communities — demanding freedom from scarcity, oppression, and machine politics.

Feel free to reach out to us at cor[email protected] if you have any questions regarding your Membership.

Harvey Milk Club's May PAC Meeting:
The Board and The Budget — Behind The Scenes!
Tuesday, May 11th | 7-9pm
Facebook Event Details Here
Zoom Details Here