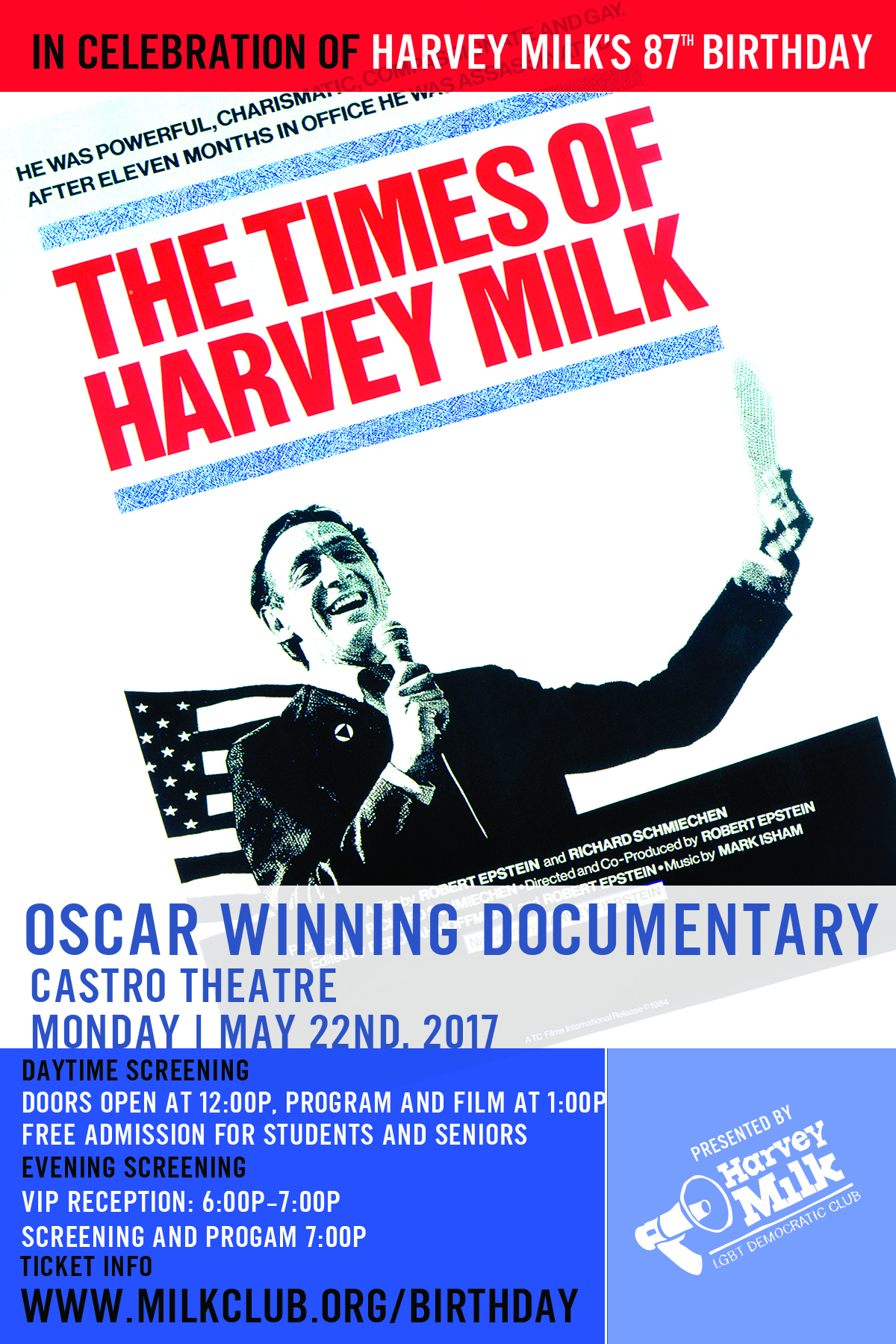 WHERE: The Castro Theatre

<<Get your tickets here>>

Celebrate Harvey Milk’s 87th birthday this year at the Castro Theatre for two special screenings of the Oscar-winning documentary The Times of Harvey Milk. Presented by the Harvey Milk LGBT Democratic Club, this anniversary event will include a daytime program, free for students and seniors, as well as an evening VIP reception and screening.

Our Daytime Program focuses on youth and senior engagement, recognizing individual roles as well as how we work as a united front in our activism on LGBTQ issues. This program will include a casual reception with our cohosts, Openhouse and LYRIC Center for LGBTQQ Youth, and a screening of the documentary. DOORS OPEN at 12pm, FILM at 1pm. This event is open to the public and will be FREE for students and seniors.
For our Evening Program, we have special guests from QWOCMAP - Queer Women of Color Media Arts Project and several short films they have curated for our event. QWOCMAP builds power through films that authentically reflect the lives of queer women of color, gender nonconforming and transgender people of color, and address the vital, intersecting social justice issues that concern our multiple communities. We'll be showing these selected shorts before our evening screening of 'The Times of Harvey Milk.' Our MC for the evening is 2017 SF Pride Grand Marshal and one of our favorite Drag Kings, Alex U. Inn! VIP Reception begins at 6pm, with our PROGRAM and FILM screenings at 7pm.

Premiering at the Castro Theatre in 1984, The Times of Harvey Milk chronicles the political career of Harvey Milk, San Francisco's first openly gay elected official, and his rise from a neighborhood activist to a symbol of gay political achievement, through to his assassination in November 1978.  Receiving international acclaim, awards and selection into the National Film Registry in Library of Congress, the documentary later became inspiration for Gus Van Sant’s 2008 Oscar-winning biopic, Milk.

“At first, Harvey Bernard Milk showed few signs he would make history,” narrates Harvey Fierstein in the opening of The Times of Harvey Milk. Eighty-five years later, it’s hard to conceive what LGBTQ history much less life in San Francisco would be without him. What better way to honor one of our movement’s most galvanizing figures than to spend an evening in the heart of the Castro remembering his legacy with living legends of the gay rights movement.

Join us for this special evening commemorating the Mayor of Castro Street. CLICK HERE FOR TICKETS!