❄️ Rain or shine, join us for the Holi-gays tomorrow! ❄️ 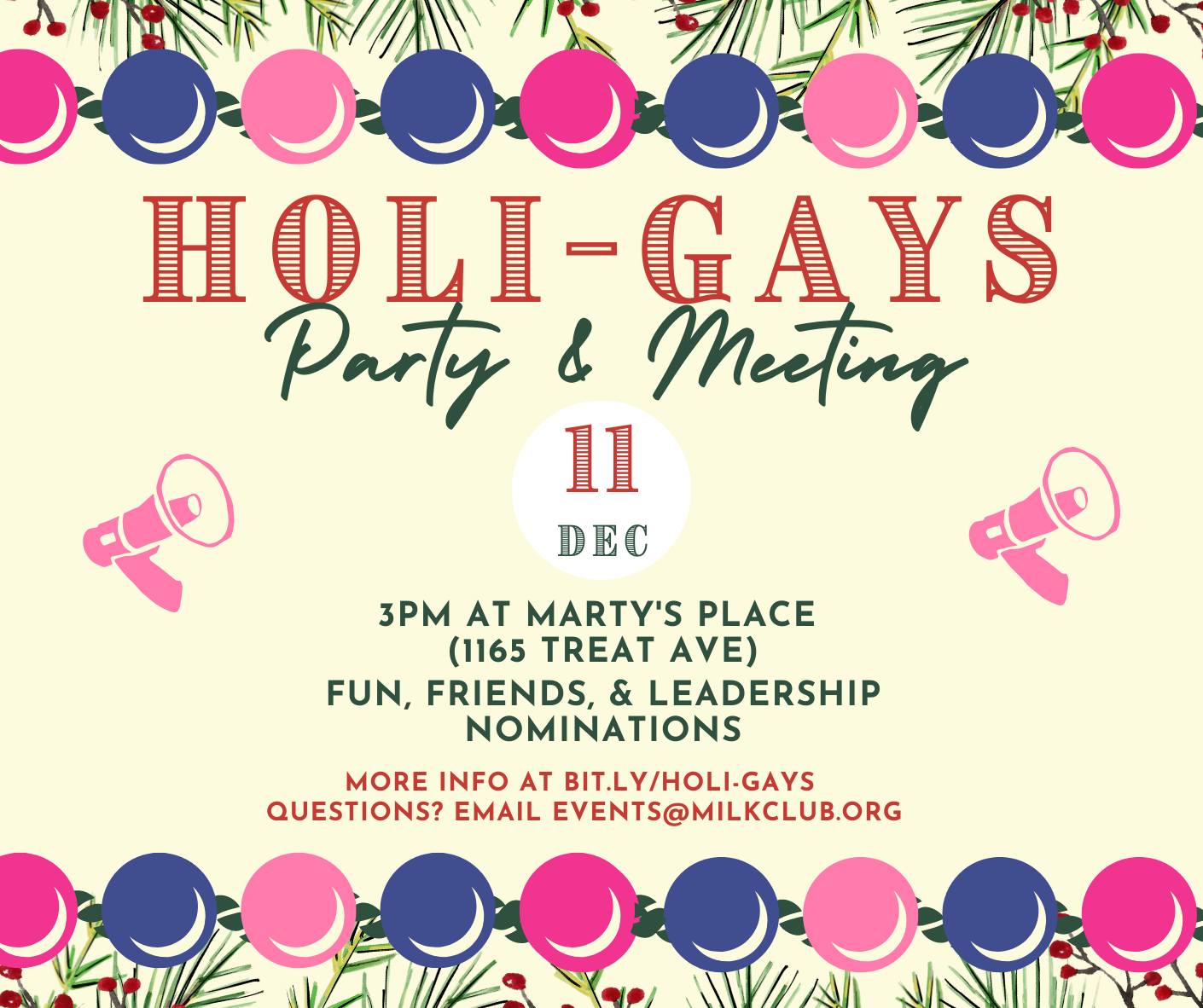 It's finally here: our Holi-Gays party will be held TOMORROW, Sunday, December 11th at Marty's Place, located at 1165 Treat Avenue starting at 3pm! Facebook event details can be found here.

This party will also be considered our December membership meeting, which means that you'll have an opportunity to make nominations for the following leadership positions:

Questions? Reach out to us at [email protected] 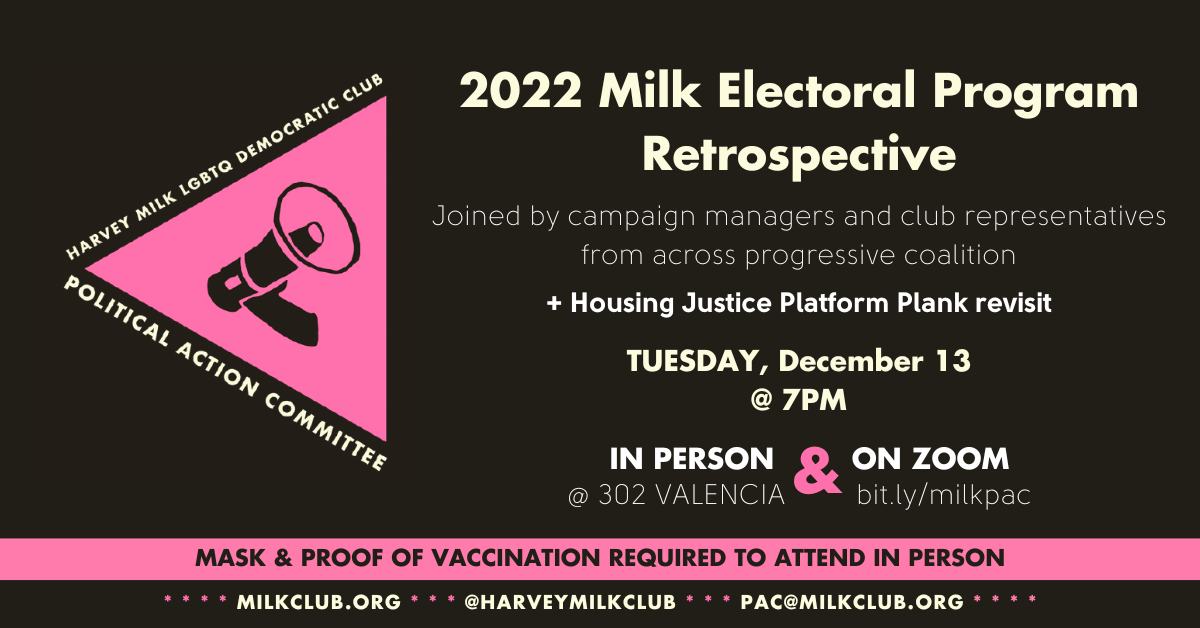 Join the Political Action Committee (PAC) of the Harvey Milk LGBTQ Democratic Club on Tuesday, December 13, at 7pm, for our December PAC Meeting. This will be a hybrid meeting, in person at Milk-SF Cafe (302 Valencia St) and on Zoom at bit.ly/milkpac.

At this meeting, the PAC will conduct a retrospective on its 2022 electoral program to help us identify opportunity areas and begin solutioning around them. We will take what we learn and apply it in 2023 as we begin organizing for our next electoral program.

Our agenda will also include revisiting and finalizing our draft housing justice platform plank. Don't miss it! 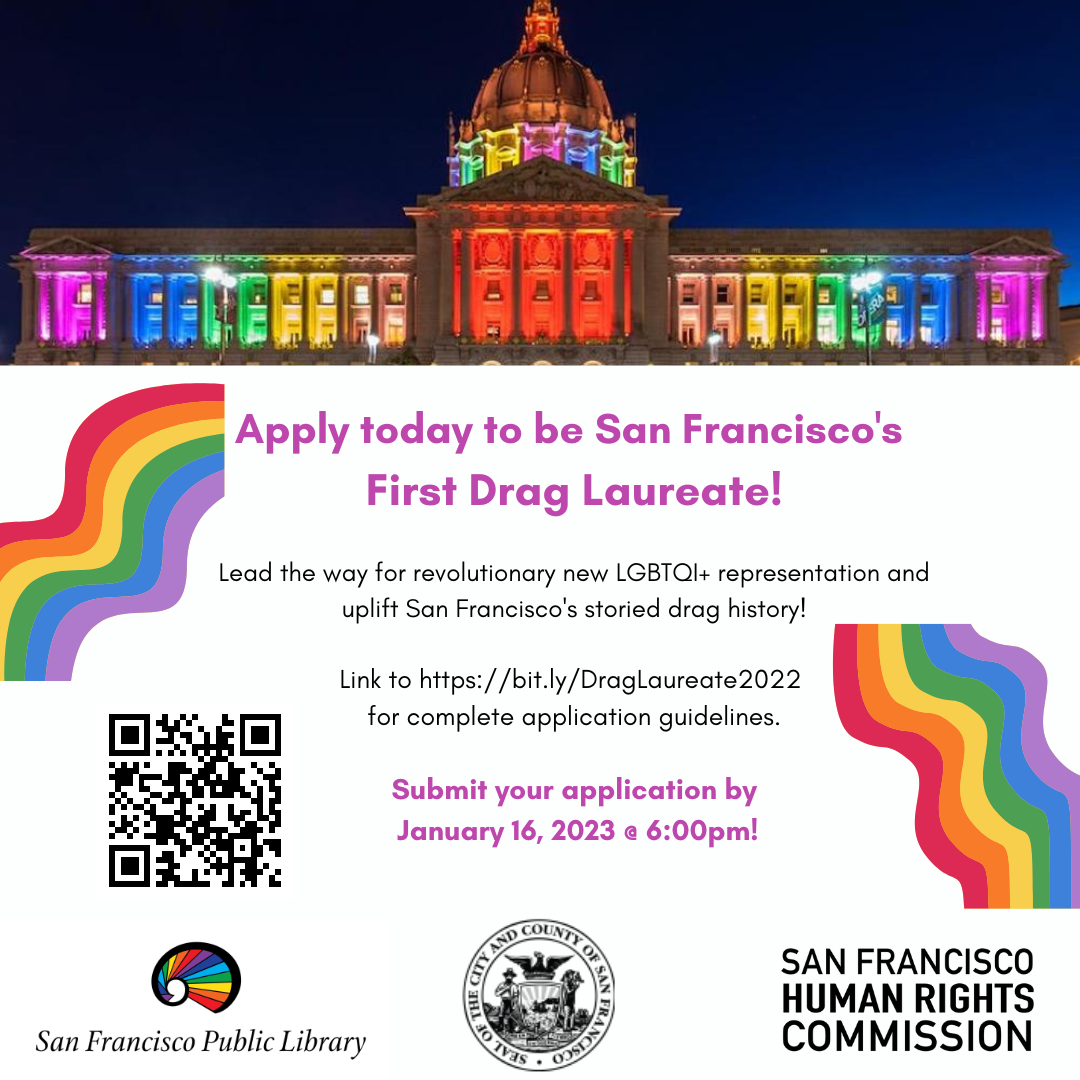 Responsibilities of the Drag Laureate of San Francisco include, but are not limited to:
Apply by January 16 at bit.ly/DragLaureate2022!

In Case You Missed It... 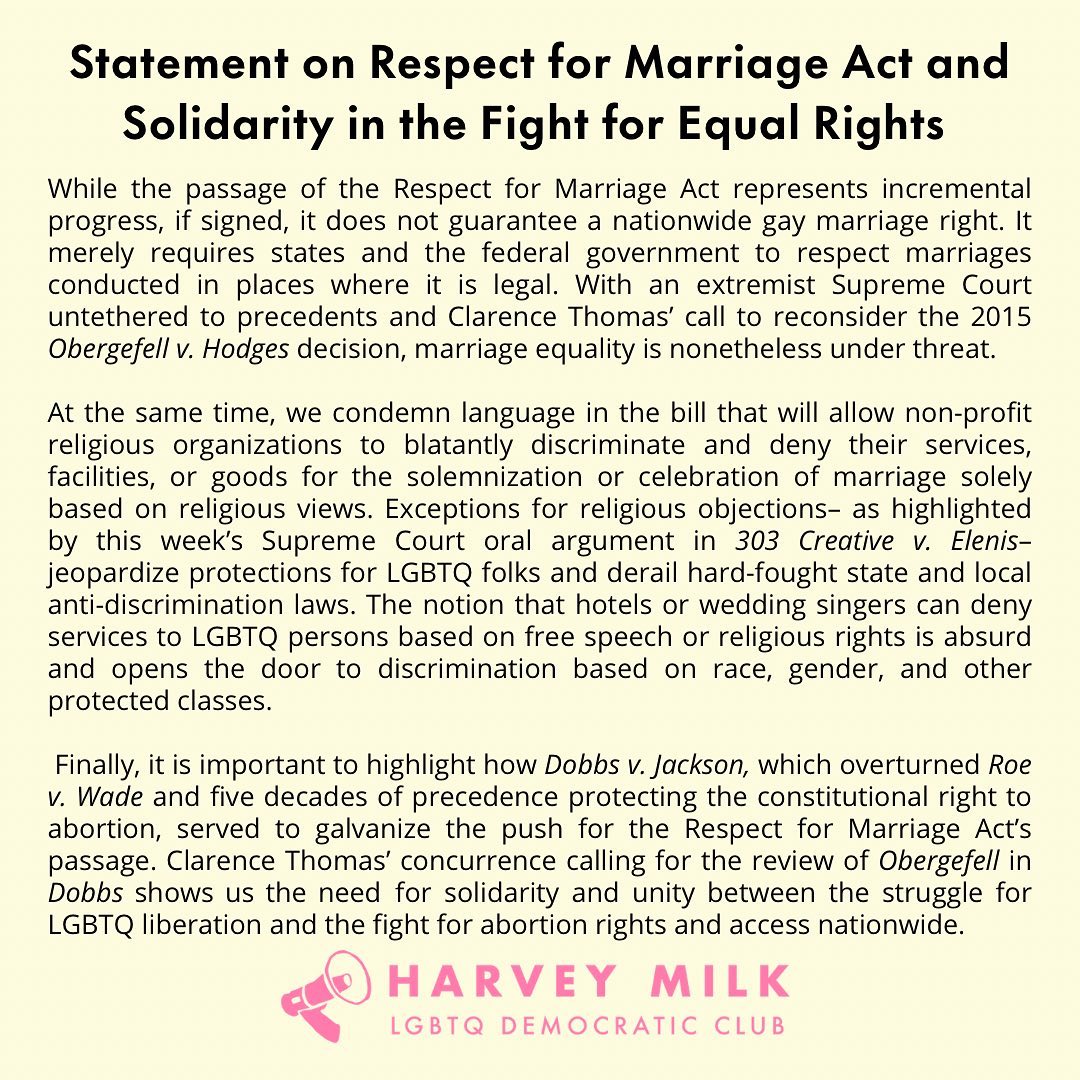 Last week, the Milk Club put out a statement regarding the passage of the Respect for Marriage Act. The text is reprinted below for accessibility:

"While the passage of the Respect for Marriage Act represents incremental progress, if signed, it does not guarantee a nationwide gay marriage right. It merely requires states and the federal government to respect marriages conducted in places where it is legal. With an extremist Supreme Court untethered to precedents and Clarence Thomas’ call to reconsider the 2015 Obergefell v. Hodges decision, marriage equality is nonetheless under threat.

"At the same time, we condemn language in the bill that will allow non-profit religious organizations to blatantly discriminate and deny their services, facilities, or goods for the solemnization or celebration of marriage solely based on religious views. Exceptions for religious objections– as highlighted by this week’s Supreme Court oral argument in 303 Creative v. Elenis– jeopardize protections for LGBTQ folks and derail hard-fought state and local anti-discrimination laws. The notion that hotels or wedding singers can deny services to LGBTQ persons based on free speech or religious rights is absurd and opens the door to discrimination based on race, gender, and other protected classes.

"Finally, it is important to highlight how Dobbs v. Jackson, which overturned Roe v. Wade and five decades of precedence protecting the constitutional right to abortion, served to galvanize the push for the Respect for Marriage Act’s passage. Clarence Thomas’ concurrence calling for the review of Obergefell in Dobbs shows us the need for solidarity and unity between the struggle for LGBTQ liberation and the fight for abortion rights and access nationwide." 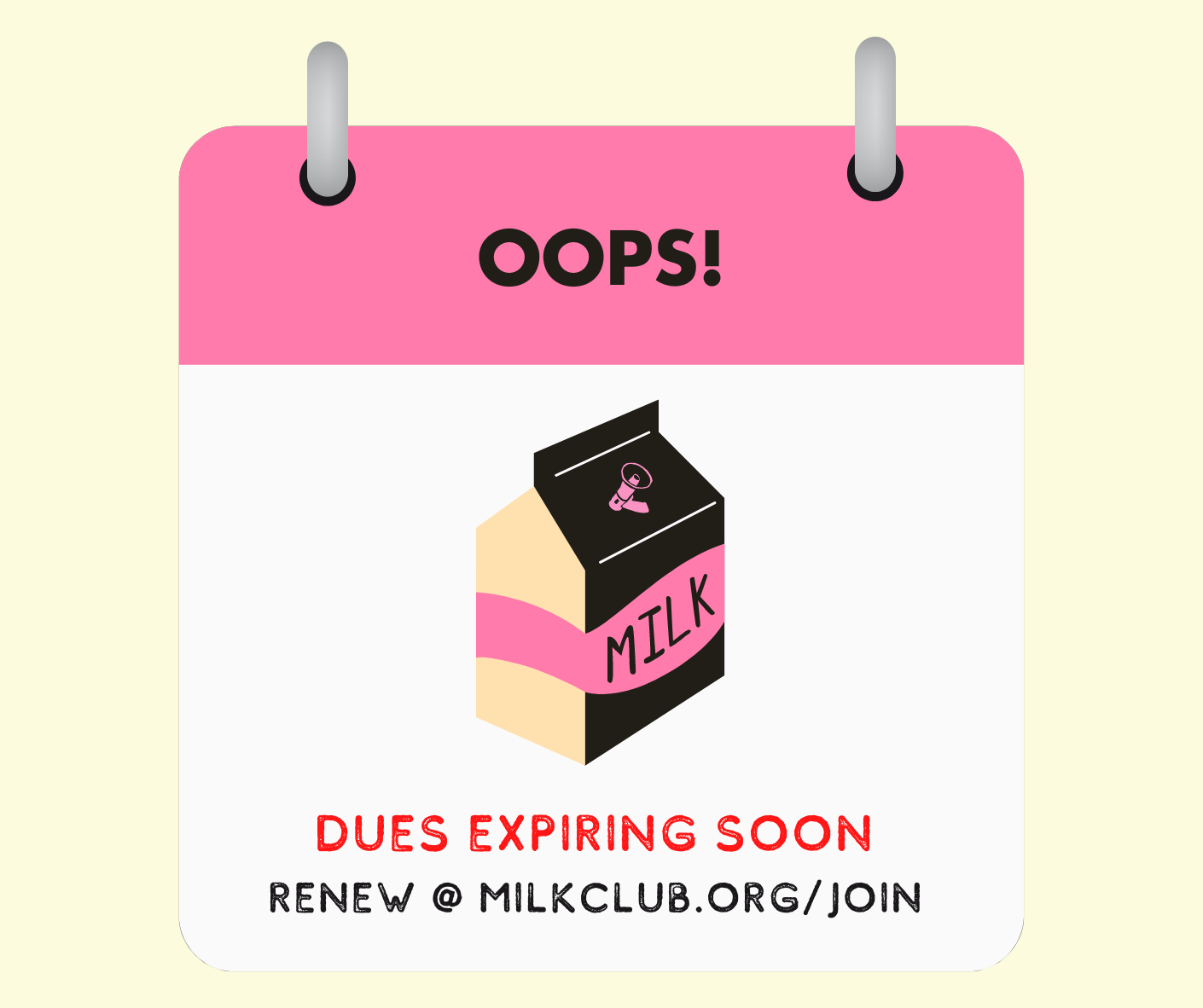 Finally, don't forget that December means Milk Club dues will be expiring in just a couple of months. We've loved having you here with us this year-- let's make it official for one more!

Cross one thing off your 2023 to-do list and renew today at milkclub.org/join