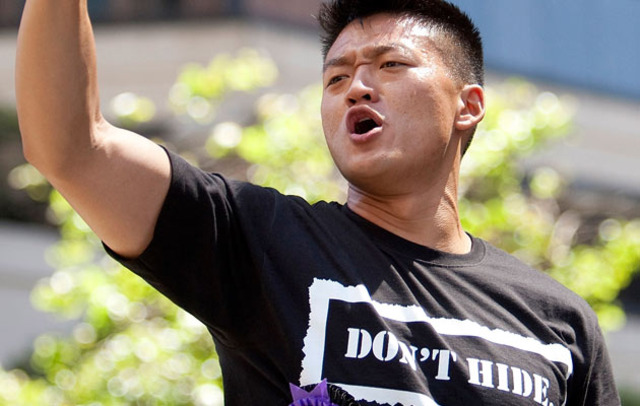 U.S. Army Lieutenant Dan Choi, staunch advocate for the successful repeal of the U.S. military’s “Don’t Ask, Don’t Tell” policy affecting LGBT service members, will be the keynote speaker at the Harvey Milk Lesbian/Gay/Bisexual/Transgender Democratic Club’s thirty-seventh Annual Dinner and Gayla at Roccapulco Supper Club on Wednesday, July 24th from 7-10 pm. Choi repeatedly chained himself to the White House’s fence in protest against this repressive policy. Tom Temprano, Milk Club President, said of Choi “Lt. Dan Choi’s use of direct action to demand justice for the queer community is reminiscent of the actions of Milk Club leaders past and inspiration to our current generation of leadership. It is an honor to have him address our club.”

Lt. Dan Choi’s selection as keynote speaker draws attention to the Milk Club’s long-standing commitment to ensure more accountability and transparency from the U.S. military and government. In addition to supporting Choi, the Club has been an outspoken supporter of U.S. Army intelligence officer Bradley Manning, who is currently facing court martial for exposing truths about the U.S. military’s actions during the Iraq War.

At next Wednesday’s dinner, the Milk Club will present the In His Footsteps Award to Bradley Manning for his heroism as an LGBT whistleblower. Daniel Ellsberg, who released the Pentagon Papers in the 1970s and has repeatedly said, “I was Bradley Manning,” will accept the award on Manning’s behalf.  Choi has also expressed unqualified support for Manning.

This year, the Milk Club created a new award to honor long time labor champion and Milk Club member Howard Wallace who died in November 2012. The Howard Wallace Labor Leadership  will honor a labor activist who, in the spirit of Howard, seeks to build unity between the labor and LGBT communities. The first honoree of this award will be Allan Baird, retired Teamster Union representative and Coors Boycott leader.

Honorees at this year’s dinner also include Senator Leland Yee, former Sheriff Michael Hennessey, ACT UP, Alicia Garza of POWER, Felicia Flames, and the San Francisco Gay Men’s Chorus. Entertainers for the Gayla include Persia & Daddies Plastik, who will be performing their red hot rage against gentrification anthem, “Google Google Apps Apps.” A delicious dinner will be provided by graduates of the kitchen incubator program La Cocina.

For more information about the event and to purchase tickets, visit: http://milkdinner2013.eventbrite.com/